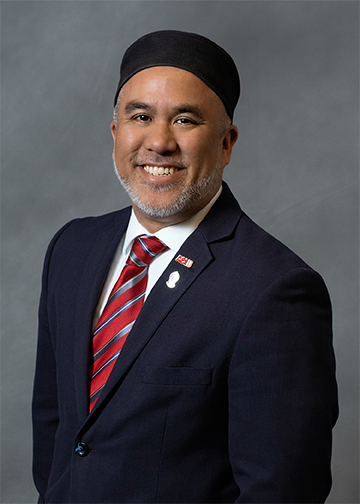 Hopida, a Filipino American Muslim, brings over 15 years of experience in communications and public relations.
Before joining the ACLU, he served as the Public Information Officer of San Diego City College. Prior to City College, Hopida was the Director of Marketing and Communications at Thomas Jefferson School of Law (TJSL). Before TJSL, he resided in Indiana where he served as Communications Director for the Islamic Society of North America (ISNA), the oldest and largest national American Muslim umbrella organization.
Hopida was instrumental in the founding and development of the San Diego Chapter of the Council on American-Islamic Relations (CAIR-San Diego), an American Muslim civil rights and advocacy organization, as its Director of Public Relations and Senior Consultant. While at CAIR-San Diego, he appeared on local and national news and wrote op-eds on Islam and American Muslim civil rights that appeared in the San Diego Union-Tribune.
In 2017, he was appointed by Chula Vista Mayor Mary Salas and the Chula Vista City Council as Commissioner on the Charter Review Commission.
In 2007, Hopida served as a Columbia University Next Generation Project Fellow for the West Coast Assembly.
Hopida holds a bachelor’s degree in Sociology from San Diego State University.

A Closer Look: The Challenges and Opportunities of Community Organizing During the Covid-19 Pandemic

The Challenges and Opportunities of Community Organizing During the...