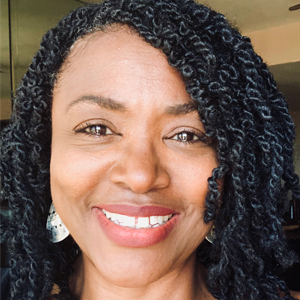 A native San Diegan, Cheryl Alethia Phelps is deeply committed to dismantling systems that perpetuate injustice, isolation and powerlessness. This passion and more than 30 years of experience in nonprofit, philanthropic, legislative and campaign environments inform her work as communications director for the ACLU of San Diego & Imperial Counties.

Prior to joining the ACLU, Phelps led a strategic communications consulting practice. Among her local projects was the design and execution of a Civic San Diego initiative empowering thousands of San Diegans to identify shared values and collaborate to evolve ideas; and the design and facilitation of San Diego Museum of Man’s focus group convenings on the Race: How Are We So Different exhibition.

Phelps was previously employed as the San Diego Foundation’s Director of Civil Society, Analysis & Strategy, where her efforts achieved notable innovation in the use of digital media to enhance news literacy and inspire San Diegans to share their own stories. Before that, she was employed by the U.S. House of Representatives’ committee with 360º oversight jurisdiction of executive branch agencies and programs. She served for five years with the Subcommittee on Legislation and National Security where her oversight work allowed her to be in the Republic of South Africa during the 1994 elections that resulted in Nelson Mandela’s presidency. She also served two years in the Minority where she was responsible for evaluating the performance of agencies such as the Departments of Education, Labor, HHS, HUD and Veterans’ Affairs.

Phelps has volunteered for numerous local, state, national and international organizations and served on several boards of directors. She was a founding director and chairman of the U.S.-Mexico Border Philanthropy Partnership. Currently, she serves on the board of directors for California Humanities, the state’s independent nonprofit partner of the National Endowment for the Humanities that champions and funds humanities-based initiatives on behalf of 40 million Californians.

A Moment of Reckoning

Flatten The Curve of Inequality

ACLU of San Diego & Imperial Counties Statement of Solidarity with...