Time for a Reality Check: Protocols Needed for Release of Police Videos 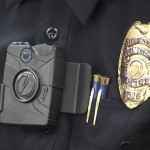 San Diego District Attorney Bonnie Dumanis called a press conference just days before Christmas to release an edited version of the long-sought video of a deadly police shooting of an unarmed man in the Midway District last April. Dumanis sought to minimize—or deny—any possibility that law enforcement mistakes may have been made, or that any police policies and practices associated with this incident should be questioned. She also reinforced the ridiculous myth that keeping a shroud of secrecy over law enforcement practices is generally reasonable and necessary for public safety.

It’s time for a reality check.

The purpose of access to public records is to hold government accountable to the community. Given the extraordinary and deadly powers vested in law enforcement, timely public access to videos capturing police/community interactions involving violence is especially crucial. 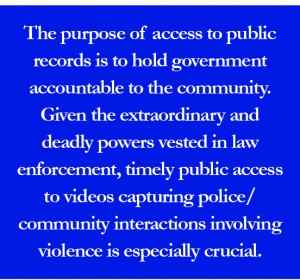 For months, Dumanis, along with the San Diego Police Department and the City of San Diego, fought against release of surveillance footage that captured the shooting of 42-year-old Fridoon Nehad, saying if the public saw the video, it could lead to a “rush to judgment” against the police officer because it would be viewed out of context. SDPD Chief Shelley Zimmerman said at the time that it would be “too dangerous” to share the video with the public. Needless to say, these warnings only bolstered the resolve of the public, press, and civil libertarians to see for ourselves what was scaring our top cops so badly.

But the video was withheld for many months, and prior to releasing the video, the District Attorney’s office determined that the officer involved, San Diego Police Officer Neal Browder, had used justifiable deadly force and declined to file any charges against him. The 27-year veteran of the SDPD failed to turn on his body camera as department policy requires, but the incident was captured on a local business’s surveillance camera. While Officer Browder suffered no disciplinary actions for his failure to activate his body camera, the SDPD did change its policy to strengthen the requirement that officers engage the cameras before they arrive on scene (already required under the policy). Even after this determination, Dumanis maintained it would be inappropriate to release the footage, and actively sought an order to prevent Nehad’s family from releasing the video as well.

But in mid-December, U.S. District Judge William Hayes ruled that Nehad’s family could release the security camera footage after December 24, Surprisingly, though,  DA Dumanis held a press conference where she unveiled an edited version of the footage on December 22, 2015.

In an excellent piece by Scott Lewis, editor in chief of Voice of San Diego, he notes wryly that while the DA said, “We’re not going to have a trial in the media,” she proceeded to try the victim providing reasons to suggest he was responsible for his own death.  For instance, though Nehad was unarmed and holding only a pen, she showed a completely unrelated video of an unidentified man twirling a butterfly knife in a menacing manner in an ill-conceived attempt to conflate the two.

Our county law enforcement leaders want the benefit of having police body cameras without any of the nuisance of having to actually share the footage and enforce officer accountability (which, as you may recall, was the driving reason SDPD got approval to implement the cameras). As Chief Zimmerman told a meeting of the San Diego chapter of the Society of Professional Journalists, “The video footages are considered evidence. And at this point, in the policy, I don’t plan to release any of the video… because it is considered evidence.”

The Washington Post responded to this position by noting  it comes down to an unofficial San Diego law enforcement policy of “just trust us.” Only they will get a say in what video is released.  “Sure, the department could only release video that exonerates officers, while keeping incriminating video secret,” the Post report says. “But they won’t do that. We know this because they say they won’t.” (Insert snarky emoji here.)

California law authorizes the release of such footage without a court order, but the decision is effectively at the discretion of the law enforcement agency.  If law enforcement is serious about improving community trust, it should recognize that it is in its own best interest to share video of police/community interactions of public importance, while taking measures to reduce privacy concerns. The public’s interest in understanding why and how an officer killed an unarmed man strongly outweighs law enforcement’s misguided preference to keep such videos secret.

Across the country, video from controversial excessive use of police force incidents have shown to be essential to begin building public trust in police and prosecutors and harnessing the necessary oversight and accountability to unveil police misconduct and change bad practices/polices.

In her press conference, District Attorney Dumanis said that she and other top law enforcement officials understand the public’s desire to see these videos, ignoring that transparency should be a goal shared by law enforcement as well. She explained that she, U.S. Attorney Laura Duffy, Sheriff Bill Gore, and Chief Zimmerman have been meeting to create a new policy for releasing police video footage. She noted they were making progress, and that we could all expect to hear their decision this spring.

It’s high time we remind our law enforcement officials that it is not only “their” decision -- they are in fact public servants, elected by and accountable to the community, and that we cannot and will not continue to tolerate their patronizing political tactics any longer.

We’re heartened that the District Attorney and other law enforcement officials are reviewing these policies. But to be effective and accepted, community members need to be treated as indispensible participants in a transparent process to establish the protocol for disclosure of videos capturing police/community interactions, including from body cameras. To open that process to the public is a first step toward building community trust in law enforcement.

Every community should have a say in how they are policed.  Defense attorneys and civil rights experts should be involved. People who have been mistreated by law enforcement officers in the past should have a say. Community members who are regularly pulled over for Driving While Black or Walking While Latino, or who are presumed to be gang members because of what neighborhood they happen to come from or where they happen to be standing should be heard.

The edited video in the Nehad shooting may have seemed like a clear-cut, justifiable shooting to San Diego’s law enforcement authorities, but to many in the public, it appeared to be more like an execution. If anything, the video raises more questions than answers; questions whose resolutions are essential to rebuilding trust in local law enforcement, which is in every police officer’s best interest.

To really achieve policies that the public can respect, Dumanis must create a committee that reflects the myriad perspectives on law enforcement in San Diego, and represents the diverse and richly complex community that she serves and that we all love. But at the very least, San Diegans have made it clear that we won’t tolerate the dismissive refrain of “Just Trust Us.” Our law officers have to build that trust by involving other perspectives and considering different opinions.

We here at the ACLU eagerly await the call from Dumanis’s office inviting us to serve on the committee!